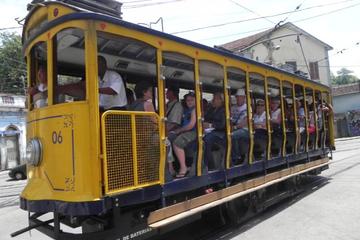 Itinerary
This is a typical itinerary for this product

Time to explore one of Rio's most beloved neighbourhoods, Santa Teresa. While this is mostly a Rio walking tour, we'll start with a little public transit, shall we? Take the subway downtown so you can experience how locals get around Rio and help orientate yourself in the city.

We'll hop off at Carioca Station and wander through the Financial District, home of huge companies such as Petrobras and BNDES. Check out Carioca Square, once the main source of drinking water in Rio, transported in by the Aqueducts of Lapa.

From here, we'll climb aboard the tram for the journey up to Santa Teresa, which is a 20 minute ride over the aqueducts which are now used as the tram route. This is the last tram line in Brazil that is used solely for transportation purposes.

Hopping off at Largo dos Guimaraes, it's time to explore the cobblestone streets of Santa Teresa! We'll wander about on foot and discover beautiful architecture, art galleries, restaurants, and local costumes that characterise Santa Teresa.

One of Rio's oldest neighbourhoods, Santa Teresa, situated high on a hill overlooking Rio, enchants locals and visitors alike with its cobbled streets and eclectic architectural styles. The views of the city centre and the bay aren't too shabby either. (Okay, they're stunning, but that's hardly a surprise...we're in Rio, after all!).

Previously a neighbourhood dominated by the elite, with their departure to more modern suburbs of Rio, Santa Teresa has been transformed into an artistic centre with many artists choosing the area as their preferred place of residence. Among the attractions in Santa Teresa is the Ruins Park and its gorgeous view over downtown Rio de Janeiro and Guanabara Bay. Many visitors compare Santa Teresa to the bohemian district of Montmartre in Paris, and we'd stay that's a pretty fair comparison.

During the Carnival, many street bands perform on the streets and the most famous one is “Bloco das Carmelitas”, which was named after the local convent, which we'll see on our way back towards the Lapa District. As our Santa Teresa Rio tour winds down, we have one final (and rather important) stop to make: Selaron's Staircase. This masterpiece and picturesque icon is one of the late artist's most famous pieces, and is without a doubt one of the highlights of this Rio tour. They always say to end on a high note, don't they?!

From Monday to Saturday